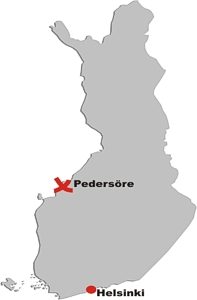 Pedersöre is an agricultural district east of the city of Jakobstad, by the coast of the Gulf of Bothnia. It has 10 500 inhabitants on an area of 824 km2. About 90% of the people in Pedersöre speak Swedish as their mother tongue, as do some 250 000 other Finnish people,

You’ll find us 400 km from Helsinki, 521 km if you go by car. The nearest airport, Kokkola, is no more than 22 km away. By train, you’ll reach Bennäs village, where you’ll find the central administration for Pedersöre and the Sursik School campus.

Pedersöre has a great variety in climate. You can swim in the lakes during the summer and in the winter you can go skating and skiing on the ice on the same lakes. Around midsummer, you can see the sun almost 20 hours a day. In the winter the situation is the opposite; If you look for it, you might be able to see the sun a couple of hours around noon.

Business in the local region
The local weather